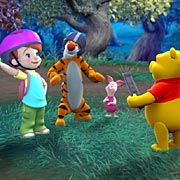 I’m not entirely sure how to spin this story. Disney is replacing Christopher Robin with a girl. I mean, on one hand, I’m a big fan of taking elements of popular culture and throwing them in the blender. I like the idea that fictional worlds are open; we can always wander into Wonderland and tinker with it, recreate it, set a new story in it. I like the idea that once a fictional world and fictional characters are released into the wild they become, on some level, the property of all of us; once we take them into our lives we create them in our imaginations, and the residue of them is left of us all to use. Fictional worlds and fictional people are like digital documents in that they can be endlessly replicated by each individual user. We make a copy, we don’t steal the original widget. So partially, reading this story about Winnie-the-Pooh, I think it’s sort of interesting that someone is very seriously stepping into his world again and see how he would respond to a little girl. (A ‘tomboy’, no less, whatever that’s supposed to mean these days.)

But on the other hand, this is Disney. This is less about stepping back into the 100 acre wood to reimagine it and more about wringing some more cash out of a classic.

“Pooh appears to be a robust brand that can handle expansion.”

Reducing Pooh to its market value makes my blood turn cold. But it makes me wonder: why replace Christopher Robin? What would a tomboy bring to this new audience that Christopher Robin couldn’t? He wasn’t a particularly masculine little boy, after all. He was a gentle little soul, not particularly exclusionary. Obviously this is less about being creative and more about repackaging something that sells to see if it will sell more. But the entire process rests on an interesting point; companies hate it when fans take possession of a character or universe and produce new stories featuring it, and often push forward the ‘integrity’ argument (something Anne Rice clings to). Interesting how corporate-driven fanfiction, which is what this Tomboy-girl thing is for Winnie-the-Pooh, is just fine to them.

So for now, Christopher Robin is out in the 100 acre wood, all on his own:

And so Christopher Robin began to run, first one way and then the next, looking for a tree or steam or path he knew, so he could find his way to his friends. He called out to them — “Pooh! Piglet! Tigger! Rabbit! Owl! — but none answered, or if they did Christopher Robin did not hear them. From time to time, however, it seemed to Christopher Robin that he could hear them, just over a small rise, all his friend’s voices, and a new voice he did not know. But when he ran that way he found nothing, just more trees and more leaves.

It was in a small pile of leaves that Christopher Robin finally lay, covering himself with their little brittle hands to ward off the chill of the night in the Hundred Acre Wood. “It’s a simple thing, really,” he said, bravely. “I’ve been looking for all my friends, and they have been looking for me! If I stay in one place, they will find me. And then we will go to Pooh’s, where I will be warm and have something nice to eat.”

And so Christopher Robin lay down in the leaves and went to sleep, shivering only a little, trusting in the love of his friends to find him and bring him home.